As we had paused for one day in Livny but we had already booked a hostel for Voronezh the next day we had to make haste a bit. Therefore we cycled around 133 km before putting up our tent. Nevertheless, we were pretty exhausted then because it had been really hot that day and the route had been quite hilly. Also we didn’t have a great meal along the remote country road but at least we had a real Russian one. 😉 Furthermore, we didn’t even have to decide what to eat as an elderly man – who seemed to be the owner or a permanent guest of that pub – did that for us. And after we had explained to him that we are cycling towards Thailand he congratulated us and told another guest. The other guest then gave us a piece of a watermelon about which we had to smile as we had already heard of watermelons as gifts in Kazakhstan. 😀 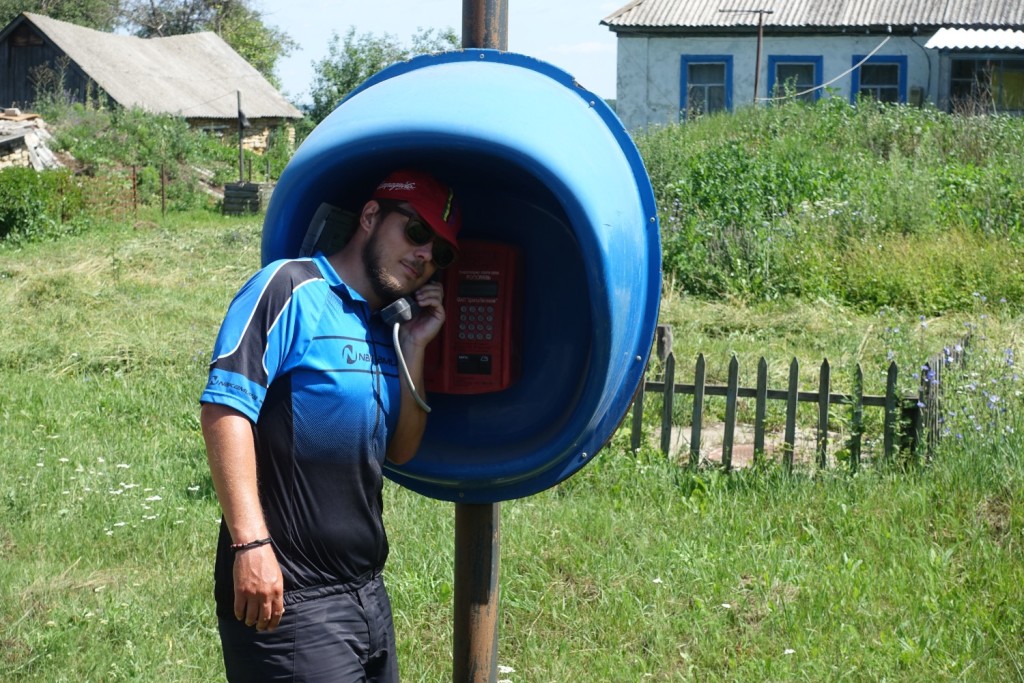 in the Russian solitude phone booths are still pretty popular 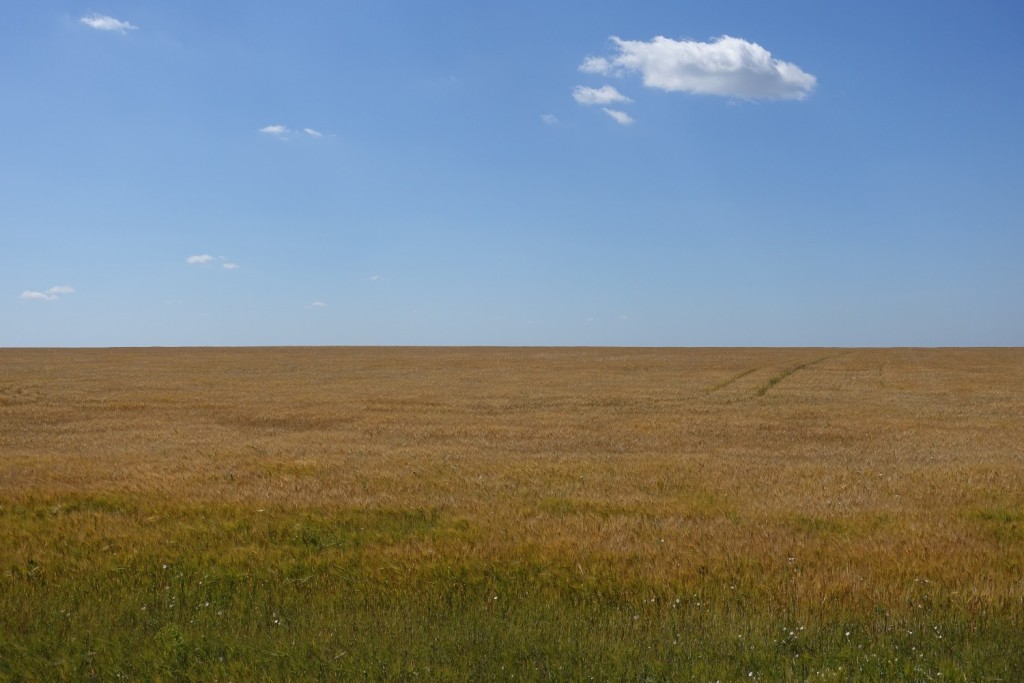 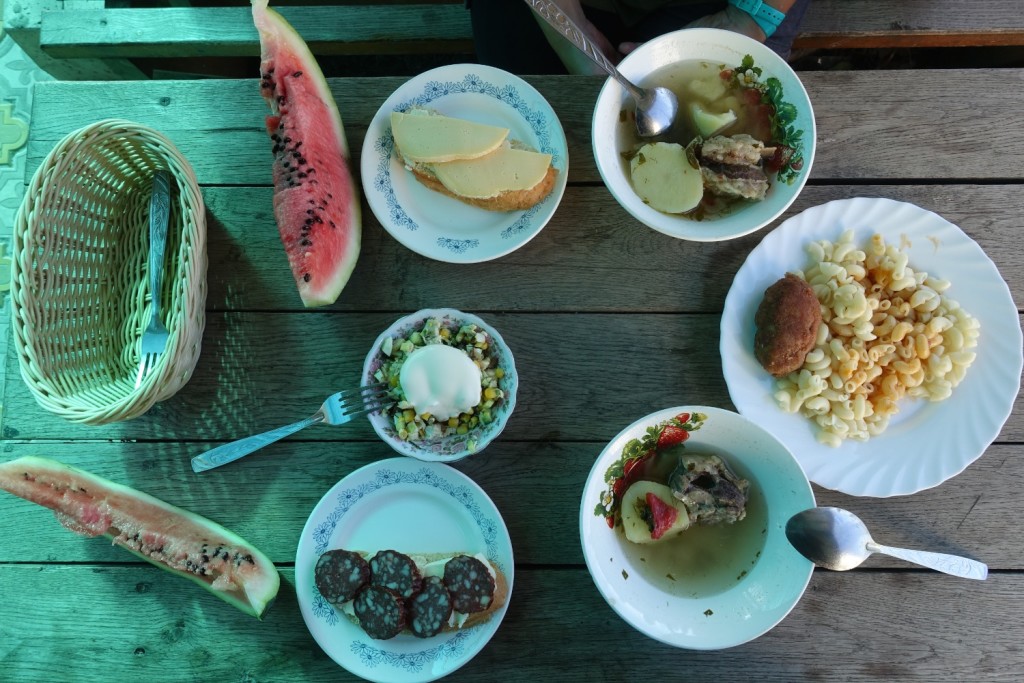 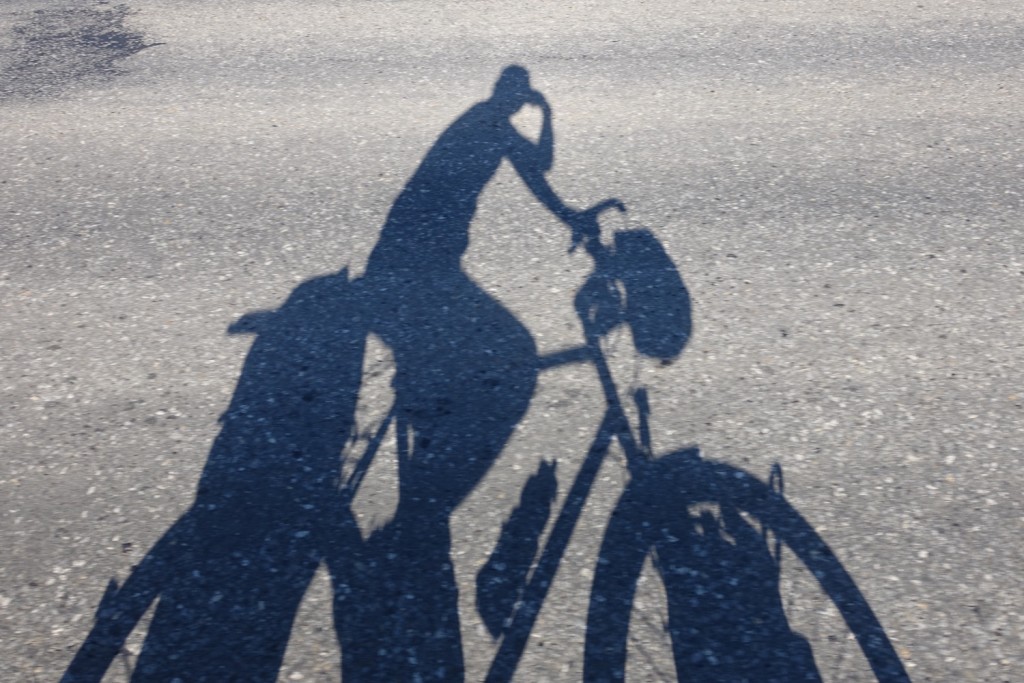 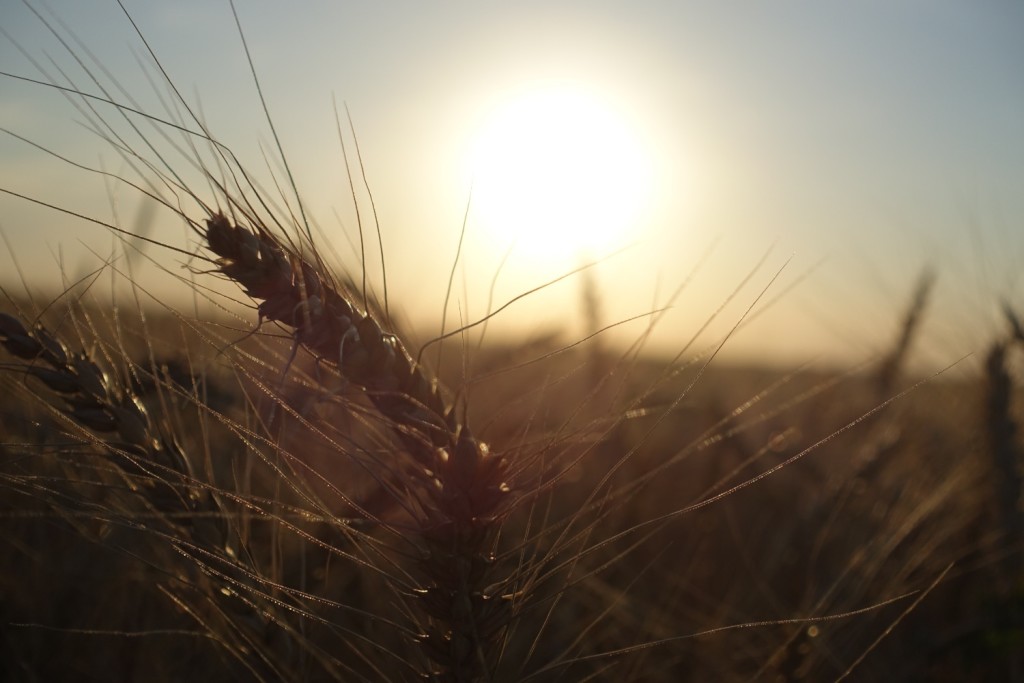 That night our camping spot was not too far from the road (but it was a pretty calm one) and a mansion with alarm system and all. When we heard somebody sneak through the forrest and the meadow nearby we were thus a bit nervous. But as soon as we had risked a glance outside we were relieved: It was only a hedgehog crawling around our tent. 🙂 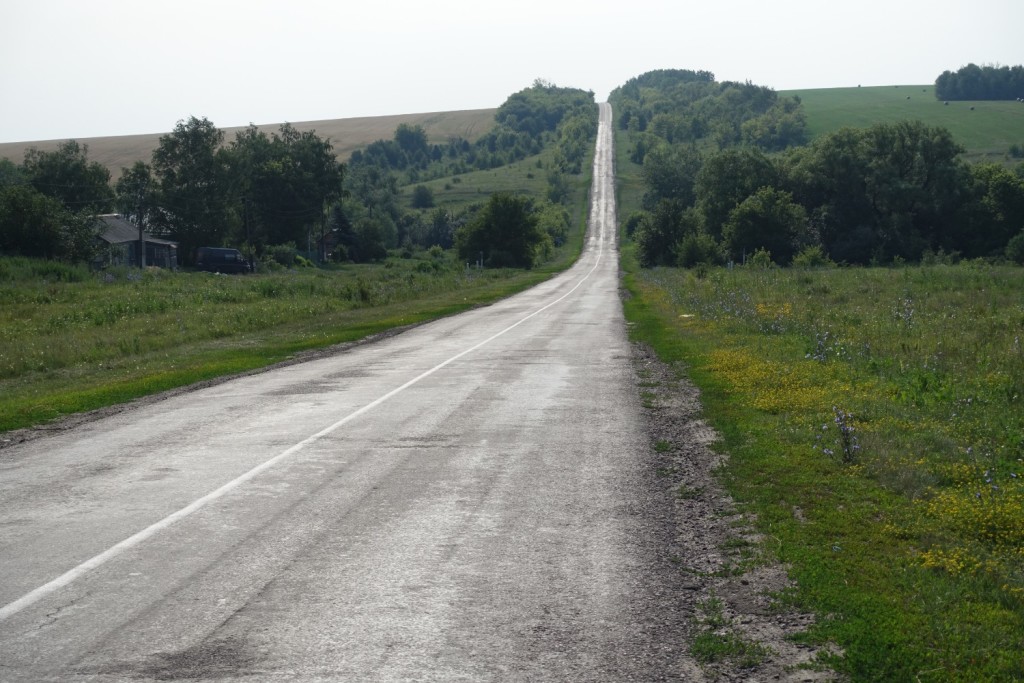 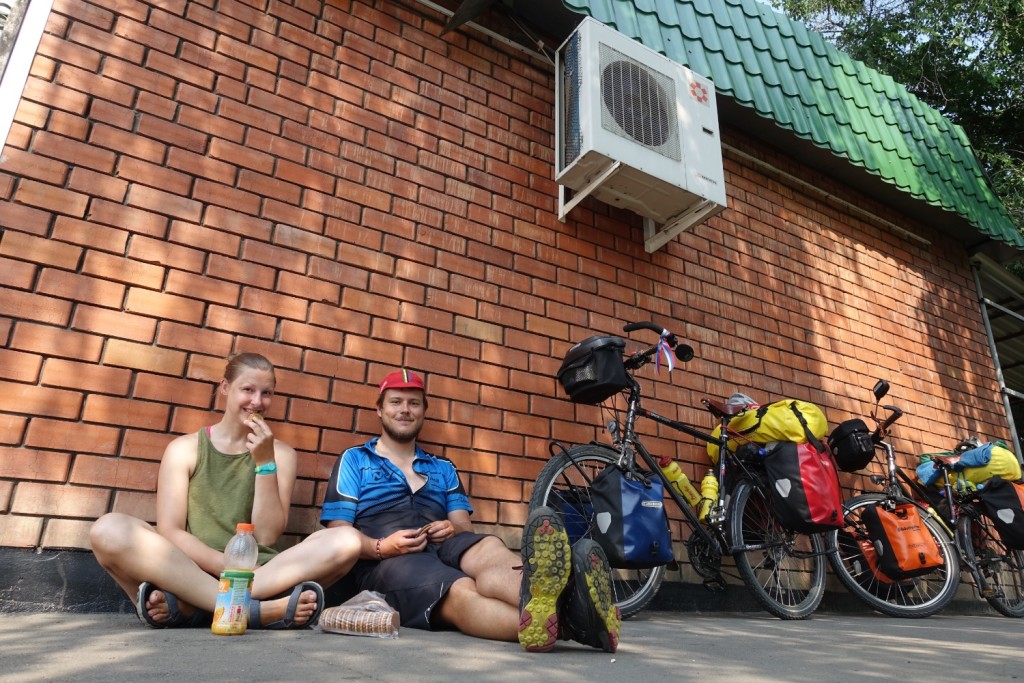 Rather exhausted we started early (by our standards) the next morning cycling towards Voronezh. As our legs were tired and we weren’t in a hurry anymore, we took it easy. Our last break was at a highly frequented crossroads where things were wild due to several reasons. Because people were selling a lot of different things there, for example chicken and eggs out of the car. Yes, indeed, there was a car full of exhausted chicken laying eggs once in a while. Even one of the sellers said to Stefan: “Crazy Russians, right?”, and laughed. 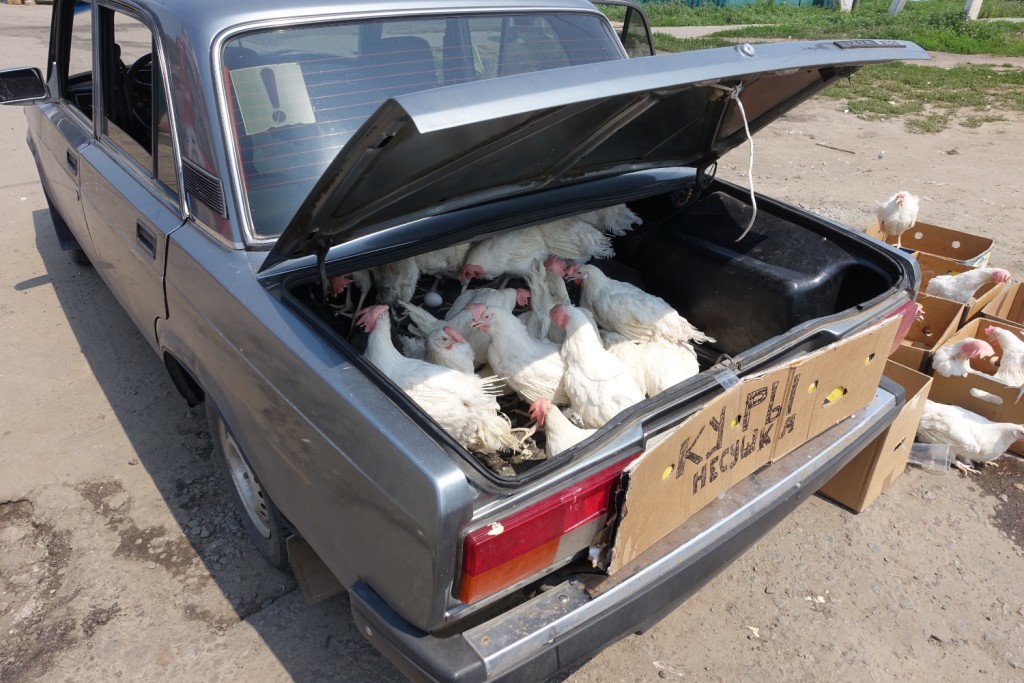 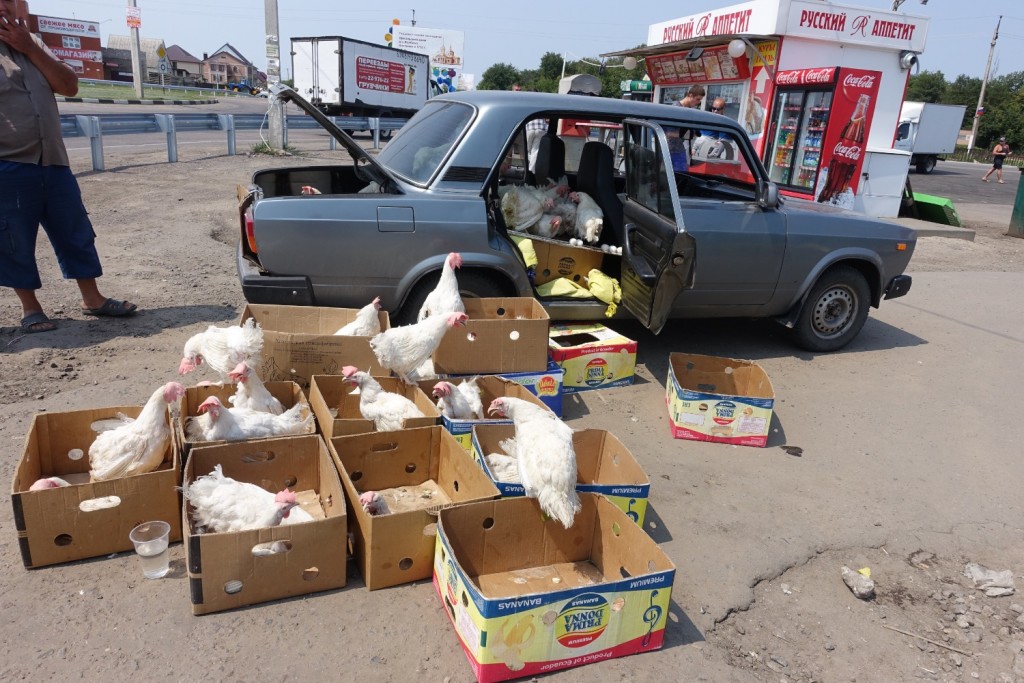 Then in Voronezh especially Alexandra was completely exhausted. The sun was really pitiless that day, we had rarely seen any shadow. Also the last 10 km had been very hilly. Then a crossroads a nice looking young female Russian asked Alexandra where we were from. When she answered the Russian was amazed and amused and told us that she and some friends would be cycling to the Crimea that summer. Wow, we thought that this was even more brave but didn’t want to tell her too clearly…
When we reached our hostel we really understood why it is named “Stadion Hostel”: It actually is in the stadion and only has windows on one side. Luckily, we had a room without windows, so we could sleep until 10 without noticing that the sun was up since 5. 😉 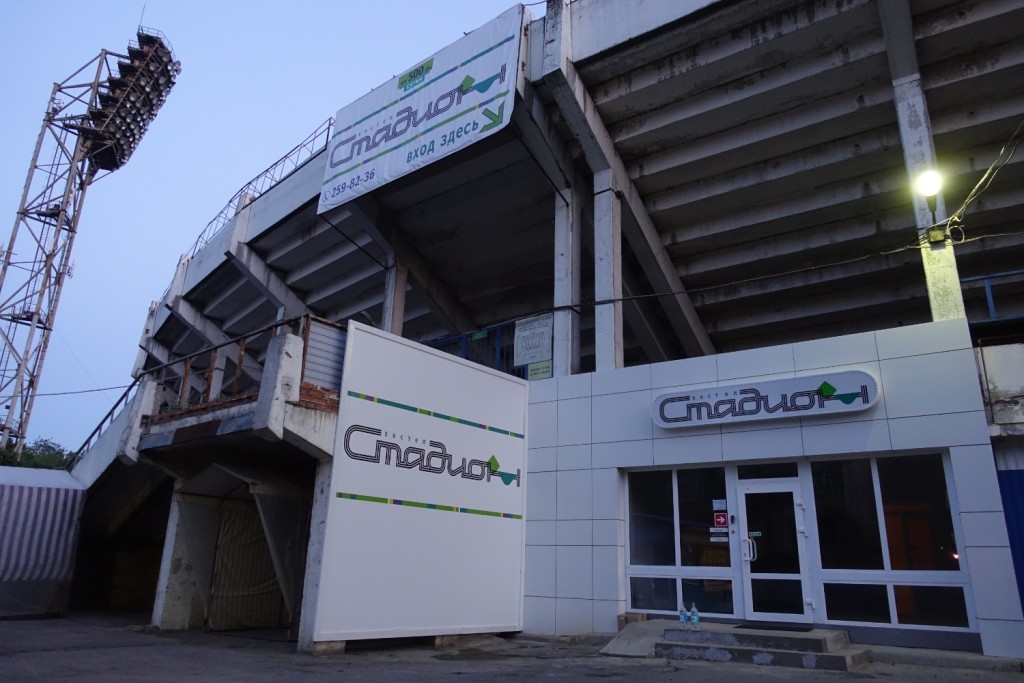 However, the situation there was not perfect when we arrived. In one room many men were trying to create a new shared bathroom while they were all discussing loudly. As they had turned off the water for that, we could not take a shower. And when we wanted to kill time by using the free WiFI it didn’t work either, especially not at our room. Therefore we wanted to wait while watching TV in the common lounge area – when suddenly the power went off completely. Ok, we were thinking, you can stop now…
The one hostel employee was pretty embarrassed and excused for the situation like a 1000 times. Also she offered us to take a shower in the fitness center 5 walking minutes away which was kind of part of the hostel. Also she accompagnied us, waited there for us and brought us back while explaining the Russian sould to us. 😀 She really was extremely nice and helpful, unbelieveable! For example she took Stefan’s dirty clothes with her on one evening and brought them back the next day washed and ironed – for free!
In Voronezh – which seems to have around 1 million inhabitants – we didn’t see too much except one shopping center. 😉 But the variety of restaurants and shops made us quite happy. However, most of the time we just planned for our trip to Moscow. As we should have enough time in Russia we decided to make a short trip to Moscow – by train and without our bicycles. Luckily, it should be possible to leave our bikes at the hostel in Voronezh until we should return. Sightseeing should be saved for Moscow. 🙂